Dear Family and Friends, we are continuing our brief discussion on ‘Accusations/ Pointing A Finger’ in Genesis.

And The Lord God Said to the wife/woman, ‘What is this that you have done?’ And the wife/woman said, ‘The serpent beguiled/deceived me, and I ate.’

In other words, Eve was saying, ‘the serpent which You Oh Lord God Created deceived me.’ Is Eve suggesting that The Creator’s handiwork failed? Some may view Eve’s comment as accusatory. Others may say that she is just stating a fact. Is Eve simply passing the buck? Was this a test for Eve? What do you think?

Adam and Eve both pointed their finger at someone else. Both attempted to justify why they sinned. Adam said, ‘The woman/the wife that you gave me she caused me to sin.’ Eve said, ‘The serpent that You Created deceived me.’ Neither Adam or Eve accepted complete responsibility for what they each did. What would accepting total responsibility for our individual failures sound like?

The Lord God gave Adam and Eve an opportunity to confess, to acknowledge their sin. The serpent was judged and sentenced without any discussion. Why?

A major point of discussing attitude is the hope that we will learn from the mistakes of Adam and Eve by taking the opportunity to STOP pointing the finger! 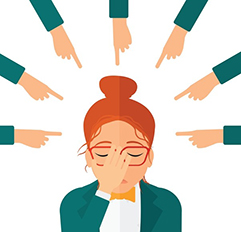 And The Lord God took the man, consisting of both Adam and Eve and put him/her into The Garden of Eden to cultivate it and to guard it.

Now the serpent was more subtle than any beast of the field which The Lord God had made.

Why were Adam and Eve punished since they were both deceived?

May each of us be especially blessed with confidence and peace for participating.