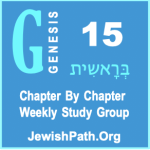 Dear family and friends, as we enter Genesis Chapter 15, The Holy Scriptures Inform us that Abraham received the highest level of Prophecy known to humans. Abraham received Prophecy through Words. Ha Torah was written with the Words the Lord God Spoke. Our words are significant. Our Words carry enormous power. We may use our words to flood the Universe with Tikkun Olam, i.e., Great Words of healing. Our Words may carry the message of Prophecy, hope, and healing. It is up to us! What type of conduit do we want to be? Do we want to use our words to heal or to hurt? It is up to us.

After these things/events, The Word of The Lord came to Abram in a vision, saying, Fear not, Abram; I Am your shield. And your reward will be great.

‘[ אַחַר ׀ הַדְּבָרִים הָאֵלֶּה הָיָה ] After these WORDS [which are things and events] that happened דְבַר־יְהוָֹה The Word of The Lord came to Abram in a vision, saying, Fear not, Abram; I Am your shield, and your reward will be great.’

The WORD הַדְּבָרִים Ha Di Vaw Reem means that the words, things, visions, events are a few of the multiple possibilities being communicated. Everything in the universe consists of WORDS. In this instance, Ha Torah is informing us SOMETHING HAPPENED before דְבַר־יְהוָֹה the Word of The Lord came to Abraham in a vision. It is easy to miss this when reading The Holy Torah in English. One needs an inquisitive mind, a desire to research, and patience to follow where the signs lead.

One single word written in Ha Torah has many possibilities, which are each part of The WORD הַדְּבָרִים Ha Di Vaw Reem expresses that multiple things happened. There are some mystical explanations as well.

(Genesis 15.1) Says, ‘ הַדְּבָרִים Ha Di Vaw Reem’ points to a multiple of words, things, events, revelations that happened when the Lord God Came to Abraham in a vision.

(Genesis 12.7) says, And the Lord appeared to Abram, and Said, ‘I will give this land to your seed.’ And there [Abraham] built an altar to The Lord, whom הַנִּרְאֶה Ha Neer Eh that appeared to Abraham.’

The Lord, who הַנִּרְאֶה Ha Neer Eh appeared to Abram.

One explanation is that Abraham was an astrologist. He learned about God through astrology. Abraham saw in the stars that he and Sarah would be childless. He shared his concerns with The Lord. Now keep in mind that Abram and his wife Sarai were both prophets with high levels of Spirituality. Because they lived in the realm of Prophecy, they were steps closer to The Lord.

(Genesis 15.2 – 5) says, ‘And Abram said, Lord God, what will you give me, seeing I go childless, and the steward of my house is Eliezer of Damascus? And, Abram said, Behold, to me you have given no seed; and, lo, one born in my house is my heir.’

And, behold, the word of the Lord came to [Abraham], saying, ‘This shall not be your heir; but he who shall come forth from your bowels shall be your heir.’ And, He [The Lord] brought him [Abraham mentally] outside [up to] the Heavens and said to him, ‘Look downward [נבט נא] to The Heavens and count the stars if you are able to count them.’ And, [The Lord] Said to [Abraham], ‘This is how numerous your seed will be.’

Our Sages state that Abraham said to The Lord. ‘Master of the Universe!’ Avram objected. ‘I have seen in the stars that I am unable to have a son!’

The Lord said to Avram, ‘Forget about your astrology! Your fate is above the prognosis of the stars. The Jewish nation is not subject to mazel /luck (natural destiny)’.

It once happened that Rabbi Yannai and Rabbi Yochanan were standing at the gates of Tiberias. They stood side by side with two [Noachide] astrologers who observed all the workers going to their jobs in the morning. [The Noachide Astrologers said to Rabbi Yannai and Rabbi Yochanan] ‘Do you see those two workers there? They are going to die of a snake bite.’

Rabbi Yannai and Rabbi Yochanan waited until the workers returned. Among them, they saw the two workers of whom the astrologers had spoken. ‘Didn’t you say that they would not leave work alive but that a snake would poison them,’ asked the Sages?

‘But then they came back in peace,’ commented the Sages.

The astrologers summoned the two men and asked them, ‘What did you do today?’

‘The same as every morning,’ they replied. ‘We prayed Shema and Shemoneh Esrei and went to work.’

‘You are Jews!’ exclaimed the astrologers. ‘the predictions of astrologers do not apply to Jews.’ Rabbi Moshe Weissman, The Midrash Says (Brooklyn, New York: Benei Yakov Publications 1980), pp 143, 144

What could have transpired with Abraham?

R. Judah b. Simon said in R. Johanan’s name: He lifted him [Abraham] up above the vault of heaven; hence [The Lord] Says to him, הַבֶּט [Look (Hah Beht) now toward heaven.’ Sometimes our perspective changes when we get a clearer view.

An additional explanation is The Lord Delivered Abraham from May Oor Kasdim, i.e., from the fiery furnaces.

And, [The Lord] said to him, ‘I am The Lord who brought you out of May Ur – Kasdim, to give you this land to inherit it.’

Remember in (Genesis Chapter 12?) We discussed the events leading to Abraham being thrown into the fiery furnaces. Remember, The Lord delivered Abraham from death in May Oor Kasdim.

An additional explanation is in our previous discussion of (Genesis 14), where Abram defeated 16 kings/kingdoms to rescue Lot, his nephew, Lot’s wife, children, and herds and return them / restore them. (Genesis 14.16) says, ‘And, [Abraham] וַיָּשֶׁב Vah Yaw Shev brought back all the goods, and הֵשִׁיב  Hay Sheev brought again his brother Lot, his goods, the women also, and the people.’

Remember, Abram was not only an astrologer, but he was also a Torah Teacher. Remember the 318 men who were born and trained in Abram’s house. They were taught in The Torah. They restored Lot, the women, and the people to Torah study and Observances.

The WORD הַדְּבָרִים Ha Di Vaw Reem refers to every event in Abraham’s life leading up to this Vision. ‘The Word of the Lord came unto Abraham in a Vision, (Beresheit Rabba 44.6).

Abraham received a Vision of Words and a Vision of Speech. The Vision was so powerful that Abraham was frightened.

Dear Ones, The Lord is Spirit, Words, Thoughts ‘Di Var Hashem דְבַר־יְהוָֹה – ‘The Word of Lord Came to Abraham in a vision.’

We observed that words are thoughts, words are spoken, words are written, and some are visually seen as written. Some words are thought, spoken, and written. There is The Word of The Lord, and then there is our word. Ten Words from the Lord created the entire universe. How about us? What can we do with just one word, Lovingkindness? The next time we speak, let us be cognizant that words are so mighty. Our words carry Prophecy and important messages from the Lord. Let’s use our words to do Tikkun Olam/ Restoration of our world. Let us use our words to uplift and encourage. Let us bless the world with our words. May we stay within the Torah’s Guidelines of righteous living and repentance. May we help others and bring peace and healing to our world. May this coming Sabbath and every Sabbath be a blessed Day.