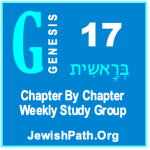 Study Partners our Sages teach that no matter how difficult things may be today, B’nai Yisroel has a path from negative to positive or from difficult to better. Does that mean everything will go the way we want? No! (Genesis 17.1) says, ‘And when Abram was ninety-nine years old, he perceived the Lord who said to him, ‘Abram, I am Almighty God; walk before Me, and be perfect.‘ In our previous discussion, ‘The Trials of Sarai,’ we discussed the disappointment Sarai endured because she could not bear a son for Abram. We need to remind ourselves, ‘Whatever the All-Merciful does He constantly does for good.’

(Berachot 60b) says, ‘Rav Huna said in the name of Rav who was citing Rav Meir, and so it was taught in the name of Rav Akiba: A man should always accustom himself to say “Whatever the All-Merciful does is for good,’ as exemplified in the following incident. Rab Akiba once traveled on the road to a certain town where he sought lodgings but was refused everywhere. He said to the innkeepers, ‘Whatever the All-Merciful does is for good,’ and he went and spent the night in the open field. He had a cock, an ass, and a lamp with him. A gust of wind came and blew out the lamp, a weasel came and ate the cock, a lion came and ate the ass. He said, ‘Whatever the All-Merciful does is for good.’ That same night some brigands came and carried off the town’s inhabitants. Later, he reminded his disciples, Didn’t I say to you, ‘Whatever the All-Merciful does is all for good?’ The lamp, cock, or ass might have disclosed Rav Akiva’s whereabouts to the brigands, but they could not. Decades after the Holocaust, we still ponder why millions of Jews, Catholics, Gypsies, and homosexuals were starved, raped, beaten, tortured, murdered, gassed, and burnt by the German Nazis in the death camps. (Jeremiah 11.19) says, ‘But I was like a gentle lamb brought to the slaughter; and I knew not that they had devised plans against me, saying, Let us destroy the tree with its fruit, and let us cut him off from the land of the living, that his name may be no more remembered.’

Despite the Holocaust and all that hate us, ‘Whatever the All-Merciful does is all for good.’

Throughout history, there have always been those who devise plans against God, Abraham, and his descendants. Cham emasculated his father, Noach, to prevent him from bringing forth seed. Nimrod attempted to murder Abraham and wipe out his descendants. Esau came with 400 men to annihilate his brother Jacob and his wives and children. Shechem Conspired to kill Jacob, His sons, Their wives, and children. Pharaoh plotted against the people of Israel, raped their wives, murdered their sons beat their husbands. King Ahasuerus permitted Haman to devise a plan for Jewish genocide. In each of these instances, God came to our rescue. Blessed is His Name. Anyone who thinks our enemies will lay their weapons down and smoke a peace pipe with us is sadly mistaken.

I cannot understand why those of us who are Jewish would promote gun control. (Ezekiel 39.9) says, ‘And those who dwell in the cities of Israel shall go forth, and shall set on fire and burn the weapons, both the shields and the bucklers, the bows, and the arrows, and the staves, and the spears, and they shall burn them with fire for seven years.’ Our enemies will continue to build their arsenals, so perhaps we should purchase all the weapons and ammo we can for battle.

Those who know me know I support peaceful coexistence and lovingkindness according to what (Nehemiah 4.12-17) says, ‘And every one of the builders had his sword girded by his side, and so they built. And he who sounded the shofar was by my side. And I said to the nobles, leaders, and the rest of the people, The work is great and wide, and we are separated on the wall, far from one another. In the place where you hear the sound of the shofar, rally to us there; our God shall fight for us. So we labored in work, and half of them held the spears from the break of dawn till the stars appeared. Also, at the same time, I said to the people, Let everyone with his servant lodge within Jerusalem, so they shall guard us in the night and labor in the day. And neither I, nor my brothers, nor my servants, nor the men of the guard who followed me, none of us took off our clothes; everyone brought his weapon with him, even to the water.’

The Talmud offers some guidelines that can be helpful. In (Rosh Hashanah 16b), Rabbi Isaac stated, ‘Four things cancel a man’s doom, namely, Charity, Supplication, Change of Name and Change of conduct. Some add Change of location.’

• (Genesis 14) informs us that Abraham and his 318 trained Talmudim, born in his house, went to war. Abraham was not a pacifist!

• (Genesis 17) informs us of Abraham and Sarah’s Change of name.

• (Genesis 18.) Informs us that Abraham and Sarah gave charity.

The Letter ה Hey replaced The Letter י Yud at the end of the Word. We do not know why The Lord waited until Sarah was 89 years of age and Abraham was 99 years of age before changing their Names. However, we know there was a י Yud difference between their ages.

We may not understand the reasoning, but we can believe that whatever the All-Merciful does is always for good. If one Hebrew Letter has the power to change our father Abraham’s and Mother Sarah’s lives, think what it could do for us.

The Sages teach that when an individual is quite ill, perhaps the family should consider adding a name to her/his existing names to change her/his course for the better.

There is so much good and lovingkindness that we can do if we look around us. We can make a difference in our world. We can lead our society out of evil and into the light of the Torah.

Study Partners, May we stay within Torah’s Guidelines Of righteous living and repentance. May we help others and bring peace and healing to our world. May this coming Sabbath and every Sabbath be a blessed Day.