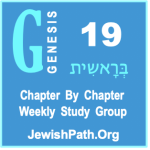 Study partners, What is one like in their worst moment, on their least desirable day? What would it be like if one chose to marry have children and grandchildren in the world’s most wicked place in an area where one is the best of the worst? What would it be like to be incredibly wealthy, politically powerful, well educated with magnificent clothing, gold, silver, massive herds of cattle, flocks of sheep and goats and servants galore? Then in a matter of hours, everything dear and precious goes up in smoke. That is pretty much what happened to Lot in the year 2047 From Creation during the Festival of Pesach / the Festival of Freedom.

Human tragedy and failure are always sad. Lot’s world was reduced to rubble. Yet, it did not have to be like that.

I wonder, will America be reduced to rubble? What is happening to our world? Russia attacked the sovereign nation of Ukraine. What has happened to us? How have we become so divided?

It boils down to this. We have no מֶלַּח salt. Why? Salt is a preservative. (Genesis 19.3) says, ‘they entered into [his part of] the house and [Lot] made them a feast, and מַצָּה – Mah Zawh meaning unleavened bread, and they ate.’ (Bereisheit 50.4) R. Isaac said: ‘A fierce quarrel broke out between Lot and his wife Eris over salt, for he [Lot] said to her [his wife], ‘Please give these guests a little salt,’ to which she replied, [in a condescending tone] ‘It is bad enough that you invited these people into the house [not our house but your part of the house]. ‘Do you want to introduce that evil practice of salt here too?’ – Then Eris went off to gossip to the neighbors about why Lot needed salt. She opposed him. Rabbi Meir Zlotowitz and Rabbi Nosson Scherman, The Artscroll Tanach Series – Bereishit Vol. I (a) (Brooklyn, New York: Mesorah Publications, Ltd. 3rd Impression, 1989), p 679 – In (Genesis 19.8) Lot says ‘do nothing to these men seeing as they have come under the shadow of my roof.’ My roof implies his portion of the house. Rabbi Nosson Scherman, The Artscroll Tanach Series – Bereisheit Vol. I (a) (Brooklyn, New York: Mesorah Publications, Ltd. 3rd Impression, 1989), p 684 – מַצָּה – Mah Zawh has another meaning – strife, quarrel or contention. Reuben Alcalay, The Complete Hebrew English Dictionary (Chemed Books Massada 1990) pp 1455,1456

What is the point? A house that is divided cannot stand. Why did this happen? We have no salt to preserve us.

Preceding the Festival of Pesach, we work long and hard to cleanse our homes of Chametz. Foods products made from barley, oats, rye, spelt, wheat that have contacted water and fermented ‘rise’ are Chametz. Shabbat Challah is Chametz during Pesach. Matzah is unleavened bread. It has not been allowed to ferment. Our Sages teach that Lot prepared the Matzah to make sure it did not ferment. Lot is alone in his kitchen preparing the feast. Where were his married daughters and their husbands? Where were Eris and their two unmarried daughters? Abraham was particular about the pollution of idolatry, whereas Lot had no objections to the pollution idolatry. He called the wicked vile Sodomites ‘Brothers’. (Genesis 19.15 -16) says, ‘At dawn, the angels tried to make Lot hurry, saying; Arise, take your wife and your two daughters who are here, lest you will be swept away in the iniquity of the city. But he lingered, and the men laid hold upon his hand, and upon the hand of his wife, and the hand of his two daughters; the Lord Being Merciful to him, and they brought him out and set him outside the city. He delayed leaving Sodom. Why? (Bereisheit 50.11) says, ‘He kept on delaying, exclaiming,’ What a loss of gold and silver and precious stones!’ Again, Lot’s failures were so sad. He had the opportunity to learn and apply HaTorah, but he went the other way. Some in this time are doing the same thing. That is dividing our house, our nation, our world. We are not standing up to the evil as we should. We have no salt.