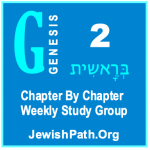 Genesis Chapter 2 focuses on  וַיְכֻלּוּ Vah Yih Coo Loo, meaning and He Finished. After six periods of creating The Lord God stopped Creating, Making and Fashioning. His work was complete! There was nothing more to do.

And He finished The Heavens and The Earth, and all hosts of them.

I cannot say with any certainty How long a Yom / Day was at the time of creation. A Yom may have been a 24 hour day. A Yom may have been millions of years. I don’t know!! So let’s dwell on the record that we have. The sun. moon, and stars we’re all fashions and placed in the sky on The Fourth Day. Yet Day One Concludes with these Words, ‘ And God called The Light Day, and The darkness He Called Night. And there was evening and there was morning, One Day. However, There was no sun or moon or stars placed in the sky. So how could one determine the day from the night? There was no sunrise or sunset. Neither the moon or the stars illuminated the night sky.

Where does this leave us?

Genesis chapter 1 concluded with a powerful declaration by our Creator. And God Saw everything that He had Made, and, behold, it was very good. And there was evening and there was morning, the sixth day. The work of creation was completed. Nothing was left to create, to make to prepare, etc. Everything in the Heavens was 100% completed for every moment of time. Everything on the earth was 100% completed for every moment of time. Nothing was left undone. Even though down through the centuries our world has been broken many times like in Noah’s day. At times humankind has followed a path of brokenness. We have failed God and each other many times with every failure we could conjure up. Every mistake we could ever make was already planned and prepared for. Nothing was excluded.

Some of us struggle with the complexities of creation. We do not understand the mixture between creation and science. We have perplexing questions. All of our questions will be answered to our satisfaction in the future. Some of us do not understand our sexual attractions. Some men are attracted to men. Some women are attracted to women. Some are attracted to men and women. Conservatives grappled over what The Holy Scriptures define as sexual deviances. Why does a father desire his daughter? Why does a mother desire her son? Who are we to question what God Has created? Who are we to define what is normal and abnormal? What may be considered normal in Adam’s age might be considered deviance in our age. For example, both Cain and Abel married their sisters. Abraham married his sister. Marrying one’s sister is prohibited to Jews since 2448 F.C. but not to Noachides. However, many societies forbid marriage between close relatives.

Dear Ones, it has been especially wonderful in learning together this past year. God Willing in the coming year we can share time together in Genesis, The First Book of The Torah. May we stay within Torah’s Guidelines. May we help others, May we bring peace and healing to our world. May this coming Sabbath and every Sabbath be a blessed Day.