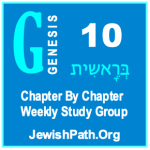 Study Partners, for those who choose, we will examine several ways of honing our Torah learning skills so we can enjoy greater levels of Torah. One of our goals is to share what a discerning eye watches for when studying Holy Scripture. What we learn will be part of our chapter-by-chapter discussion.

• To gain greater depth, it is necessary to question what we read. Why is Ha Torah sharing that information?

• To gain greater depth, it is necessary to question what we read. Why is Ha Torah sharing that information?

(Genesis 10.1) begins with,’ וְאֵלֶּה and these תּוֹלְדֹת are the offspring בְּנֵי־נֹחַof Noach’s sons, Shem, Cham, and Japheth, and to them, sons were born after the flood.’ Why is Ha Torah sharing information that some think we already know? Could we be missing something important? In this instance? Yes! (Genesis 7.7) says, ‘And Noah went in, and his sons, and his wife, and his sons’ wives with him, into the ark.’ (Genesis 8.15 – 18) says, ‘And God Spoke to Noah, saying, Go out from the Tava, you, and your wife, and your sons, and your sons’ wives with you. Bring out with you every living thing that is with you, of all flesh, both of bird and cattle, and of every creeping thing that creeps upon the earth; that they may breed abundantly in the earth, and be fruitful, and multiply upon the earth. And Noah went out, [first] and his sons, [second] and his wife, [third] and his sons’ wives [fourth] with him.’ Ha Torah’s language informs us that the men and women were separated. Yet, Ha Torah does not use the exact words stating, ‘the men were separated from the women.’ (Genesis 8.17) says, ‘Bring out with you…that they may breed abundantly in the earth, and be fruitful, and multiply upon the earth. Ha Torah does not explicitly say they were commanded not to cohabitant? Yet, the inference is there. Bring them out so they can cohabitant.

When we have questions and need more information, we review reliable works like the Mishnah, the Talmud, the Midrashim. We have been accumulating, organizing, and storing data. We read commentaries of scholarly people like Rashi, Ramban, and others known for their Torah insight. Please note the following examples.

(The Talmud, Sanhedrin 108b) says, ‘Our Rabbis taught: Three copulated in the ark, and they were each punished — the dog, the raven, and Cham. The dog was doomed to be tied, the raven expectorates [his seed into his mate’s mouth], and Cham was smitten in his skin.’

(The Midrash Says) The three who sinned by copulating while in the Tava were the dog, the raven, and Cham, Noach’s son. Cham’s wife gave birth to the giant Sichon while on the Tava. Shamchazael fathered Sichon. He was one of two fallen angels [Uzza and Azael] that God permitted to live as men on earth so that they could experience human temptation. (Genesis 6.2,3) says, ‘And it came to pass when men began to multiply on the face of the earth, and daughters were born to them, That the sons/Angels of God, [Uzza and Azael] saw the daughters of men that they were pretty; and they took as wives from all those whom they chose.’ (Genesis 6.4) says, ‘There were – Nefilim/the fallen – in the earth in those days; and also after that, when the sons/Angels of God came into the daughters of men, and they bore children to them, i.e., Uzza and Azael.’ Sichon and Og were the descendants of Uzza and Azael.

Cham had relations with his wife to save face. Cham was repaid measure for measure because that act was perpetrated in the dark. He departed the Tava black-skinned. All Cham descendants are also black forever. Rabbi Moshe Weissman, The Midrash Says (Brooklyn, New York: Benei Yakov Publications 1980), pp 97-98

(Genesis 9.1) informs us when Noach and his sons could begin procreative again, ‘God blessed Noah and his sons, and said to them, Be fruitful, multiply, and replenish the earth.’ The Blessings of procreation were given before Cham emasculated Noach.

Now, these are the generations of the sons of Noah, Shem, Cham, and Japheth; and to them were sons born after the flood.

(Genesis 9.19, 20) says, ‘And the sons of Noach, Shem, and Cham, and Japheth; ‘WENT OUT’ from the Tava; and Cham, He fathered Canaan. These are Noach’s three sons, and from them, all the earth was repopulated.’ Yet, we know that two beings descended from ‘the fallen, Shamchazael and the giant Og.’

(Genesis 8.4) informs us that the Tava rested upon the mountains of Ararat. Mount Ararat is in eastern Turkey on the Armenian border about 700 miles from Jerusalem, The Holy City.

(Genesis 8.20) Says, ‘Noach built a מִזְבֵּחַ Meez Bay Ach, the altar to The Lord; and took of every ritually clean beast, and every ritually clean bird, and offered burnt offerings on The Altar.’ (Genesis 8:20) informs us of the first occurrence of the word Meez Bay Ach ‘Altar’ in Holy Scripture. Noach was a Spiritualist, not Jewish, Christian, or Muslim, who built an altar and offered sacrifices from ritually clean pure animals and fowl to HaShem. Noach was the first human to be accredited with building an altar to HaShem to offer Burnt Offerings.’ Holy Scripture is making a statement that we must connect the dots.

To the casual reader, It may appear like Noach, his family, and all living beings exited the Tava and built an altar to offer sacrifices shortly after that. These events required some time. Noach’s first obligation was to locate the area for the future location of the Holy Altar. Then Noach built the Altar there and offered burnt offerings to sanctify the world after the destruction.

Noach and his sons settled in the area near Jerusalem. They traveled to the future location of where the Holy Altar would be. That is crucial because Noach, his sons, and their wives left the Tava behind.

Rabbi Aryeh Kaplan states that Adam was created from the dust of the ground from around the future location of the Holy Altar. Why? The Altar is The Place for atonement. After Adam and Chavah sinned, Adam returned to where they were created and built an altar of atonement. He offered matzoh for a sacrifice. Rabbi Aryeh Kaplan, Jerusalem the Eye of the Universe, New York, N.Y. Publishers: National Conference of Synagogue Youth / Union of Orthodox Jewish Congregations of America, 2002} pp. 13,14.

What are the conclusions we can draw from our discussion? Cham’s actions were defiant!!

• He cohabited with his wife after being directed to remain separated. Outside of the ‘HOLY’ Tava, the inhabitants of the world were being judged because of their unrestrained sexual perversions. Those abiding within the Tava were intended to be HOLY, i. e., separated from the wicked. God selected them to be the Holy ones to repopulate the world after the flood.

• Cham’s descendants did not replenish mother earth, i.e., they did not spread throughout the world as directed by God. Instead, they rebelliously grouped together and formed a mutiny to construct a tower to walk in and out of Heaven. (Genesis 11.4) says, ‘Come, let us build us a city and a tower, whose top may reach to heaven; and let us make us a name, lest we be scattered abroad upon the face of the whole earth.’ They were unwilling to live in Jerusalem, the city of peace.

• Cham emasculated his father, Noach, to prevent him from continuing as the high priest, offering burnt sacrifices, making atonement, and producing children to replenish the earth. The points in our discussion come down to the issues between obeying God’s commands or defiant rebellion, do we choose to be good or evil, righteous or wicked.

Let’s do our best to live righteously.