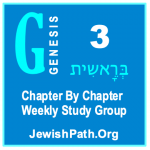 Study Partners (Genesis 2.25) States, the two of them, i.e.; Adam and Eve, were עֲרוּמִּים Ah Ru Meem / naked, shrewd, sly, and crafty. The man and his wife, and they were not ashamed. That may seem odd but it was normal. At that time they were living in a pure state. (Psalms 104.1 – 2) informs us, ‘Bless the Lord, O my soul. O Lord my God, You are very great; You are clothed with glory and majesty, Who covers Himself with light as with a garment.’

Adam and Eve went about their daily routine naked. They were not encumbered with material clothing. They did not wear Tallit of or Tefillin. The observances of Tallit and Tefillin were not given to them. Their responsibility then was to guard The Garden from the evil serpent and to make children. They lived in a state of bliss, a place of delight, a place of Divine happiness. They enjoyed pleasure and ecstasy. The Garden of Eden was wonderful for them until they had dealings with הַנָּחָשׁ Ha Naw Chawsh meaning the serpent. Why? Genesis 3.1 And the serpent וְהַנָּחָשׁ was עָרוּם Aw Room, more subtle than any beast of the field הַשָּׂדֶה which The Lord God had Made… עֲרוּמִּים Ah Ru Meem is the plural for עָרוּם Aw Room, subtle naked, shrewd, sly, and crafty.

Why does The Torah Introduce Adam and Eve as עֲרוּמִּים Ah Ru Meem, naked and the serpent as עָרוּם Aw Room, subtle? Perhaps it is because we are discussing two human beings who are Ah Ru Meem, naked and one serpent who is עָרוּם Aw Room, subtle. Yet, there is a beastly entanglement. The Torah Says, that the serpent was more subtle than any beast of the field which The Lord God had Made. The Torah teaches us that the beast of the field was made from the earth during the sixth Yom of Creating. (See Genesis 1.24 – 25) Everything that was made was made in an age prior to humankind. Each Yom evolved into the next Yom, Day, Age, etc. It is possible that periods of creation evolved from one period to another and so forth as instructed by The Word of The Lord God! Remember our discussion from Genesis 1.

Everything from א Aleph, The First Letter of The Aleph Bet To ת Taw, The last Letter of The Aleph Bet is included. God Wants us to know that He Created everything in The Heavens and everything on the earth and in all creation. In Genesis Chapter one we learned אֵת Art / Eth was an emphatic way of saying ‘Everything is included from the Letter Aleph to The Letter Tav. In other words everything from Aleph to Tav is ‘Entirely or Completely included.’  (Psalms 148.1 – 5) says, ‘Hallelujah! Praise the Lord from the heavens; praise Him in the heights. Praise Him, all His angels; praise Him, all His host. Praise Him, sun and moon; praise Him, all you stars of light. Praise Him, heavens of heavens, and you waters that are above the heavens. Let them praise the name of the Lord; for ‘He צִוָּה Tzee Vah – Commanded, and they were created.’

We return to the point at hand, we noticed that all of the animals were created from the earth.

(Genesis 3.1) says, Now the serpent was more subtle than any beast of the field [the earth] which The Lord God had Made. When we make that connection between humankind also being formed from the dust of the earth to that of the beast of the field who was formed from the earth we see a basis for evolving. Humankind came after the animals. There is a possible agreement between The creation of humankind evolving from the same earth as animals. Either way, it does not change the narrative that The Lord God formed man from the dust of the ground.

Adam / Chavah were formed from the dust around The Holy Altar near The Holy Temple in Jerusalem. Rabbi Aryeh Kaplan, Jerusalem the Eye of the Universe, {New York, N.Y. Publishers: National Conference of Synagogue Youth / Union of Orthodox Jewish Congregations of America, 2002} pp. 13,14

What was the punishment for the serpent? (Genesis 3.14) says, ‘And the Lord God said to the serpent, Because you have done this, you are cursed above all cattle, and above every beast of the field; upon your belly shall you go, and dust shall you eat all the days of your life.’

(Genesis 3.1) Describes the serpent וְהַנָּחָשׁ as עָרוּם Aw Room, as  naked. It doesn’t stop there The serpent was described as being more subtle than any beast of the field הַשָּׂדֶה which The Lord God had Made… עָרוּם Aw Room is a notation of the serpents active sin life.  עָרוּם Aw Room, subtle naked, shrewd, sly, and crafty. Adam And Eve’s Aw Room, subtle nakedness, shrewdness, slyness, and craftiness surfaced after their disobedience. It was always present with them but The Shekinah Separated the evil from the good. Remember! Everything that was created in us including the potential for evil was created prior to any of us becoming downtrodden and disobedient to The Lord. We can allow disobedience to grow in our lives or we can put an end to disobedience in our lives.

Disobedience causes us to hide from The Lord as Adam and Eve did In (Genesis 3.7 – 3.13). And to Adam He Said, Because you have listened to the voice of your wife, and have eaten of the tree, of which I commanded you, saying, You shall not eat of it; cursed is the ground for your sake; in sorrow shall you eat of it all the days of your life; thorns also and thistles shall it bring forth to you, and you shall eat the herb of the field; In the sweat of your face shall you eat bread, till you שׁוּבְךָ Shoo Vih Kaw / RETURN to the ground; for out of it you were taken; for dust you are, and to dust shall תָּשׁוּב YOU SHALL RETURN.

The Lord God Offers us other paths for repentance. Giving Tzedakah offers repentance. Acknowledging our sin and making plans to not repeat our sin along with offering to pay restitution provides repentance.

Study Partners it is especially wonderful to know that The Lord God Offers us easy ways to repent. God Willing, we will share some time together. May we stay within Torah’s Guidelines Of righteous living and repentance. May we help others, May we bring peace and healing to our world. May this coming Sabbath and every Sabbath be a blessed Day.