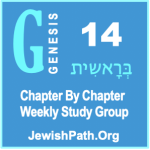 Different views of The Holy Torah

Study Partners in (Genesis 13) Ha Torah informed us of a painful separation between Abraham and Lot. Abraham was meticulous in his business practices. Lot was not. Abraham learned Ha Torah from birth and did his best to observe what he learned. Lot did not. Lot was more or less along for the ride. After following Abraham for a few months Lot expresses his desire to revert to idolatry like the people of the land (Zohar A 84a). Immediately Abraham said, ‘Please separate from me.’ That was in addition to stealing. When Abraham traveled, he instructed his herders to place muzzles on all of his livestock so they would not graze in other’s fields, but Lot’s livestock did not go out muzzled. So Abraham’s herdsmen said to them, ‘Has robbery been permitted?’ Lot’s herdsmen replied: ‘The Holy One, Blessed be He, said to Abraham, ‘Unto your seed I will give this land (Genesis 12.7). Abraham is a barren mule who cannot beget children; therefore, Lot will be his heir; if they eat, they are eating their own.’ Then the Holy One, Blessed be He said to them, ‘I said to Abraham, I will give this land to your seed’ (Genesis 15.18). When? When the seven nations are uprooted from it. However, the Canaanite and the Perizzite dwelt in the land, so they presently have a right in the land.’

The genealogical narrative of the descendants of Shem changes with the births of Abraham, Nachor, and Haran. Why? Ha Torah’s focus becomes Abrahams.

(Genesis 11.26) says, ‘And during year seventy, Terach lived, and fathered all of Abram, all of Nachor and all of Haran.’ What we just read defines A Torah’s uniqueness regarding the number seventy. What do I mean? Every letter and number in Ha Torah is unique and special. However, specific numbers like One, Seven, Eight, Ten, and Seventy have special Spiritual significance. (Daniel 9.24) speaks of ‘Seventy Weeks.’ (Numbers 11.25) discusses ‘Seventy Elders’, Seventy Nations, Seventy languages. (Genesis 46.27) says, ‘all the souls of the house of Jacob, who came to Egypt, were seventy.’ The normal reaction for those who realize the significance of the number 70 should be to study year seventy of Terach’s life to learn what the Holy Scriptures are saying to us.

We know that Abram, Nahor, and Haran were not triplets. In (Genesis 20.12) Abraham explains, ‘[Sarah] is my sister; she is my father’s daughter, but not the daughter of my mother.’ Ha Torah establishes Terach had at least two wives, so there is a distinct possibility that three sons could have been born to him in his seventieth year.

The Significance of Torah Dates

Abraham is ten years older than Sarah. In (Genesis 17.17) Abraham says, ‘Shall a child be born to him who is a hundred years old? and shall Sarah, who is ninety years old, bear? (Genesis 25.26) says, ‘Isaac was sixty years old when she bore them.’

Now we look for an event and work forward or backward from there. (Genesis 10.26) says, ‘And to Eber were born two sons; the name of one was Peleg; for in his days was the earth divided, and his brother’s name was Joktan.’ When the Holy Scriptures Speak of the earth being divided, Torah refers to (Genesis 11.1 – 9) when the Lord confused the languages. Ha Torah ties Peleg’s death to the year the Lord confused the languages. That was in 1996 From Creation. Abraham was 48 years old. Sarah was 38 years old. How old was Sarah’s brother, Lot? Ha, Torah is vague on Lot’s age.

That brings us to Genesis 14, when Lot, his wife, and daughters were taken captive. After Lot separated from Abraham, he married Edis, a native of Sodom. Rabbi Yisrael Yitzchok Yishai Chasidah, Encyclopedia of Biblical Personalities (Jerusalem/Mashabim, 2003) 7th edition; Shaar Press, p318

(Genesis 14:14) provides us with additional information about Abraham’s wealth, providing we are willing to explore the depth of The Holy Scripture. (Genesis 14:14) says, ‘And when Abraham heard that his brother / Nephew Lot was taken captive, he armed his trained servants, born in his own house, three hundred and eighteen, and pursued them unto Dan.’

• Abraham had 318 ‘trained servants.’ – They were his Talmudim / Disciples he trained in Ha Torah. He instructed them in the Way of God.

• They were ‘Born in his own house.’ – Abraham trained them from birth. That means 318 fathers, 318 mothers, 318 young women, and some grandparents, brothers, and sisters. Abraham likely had over 1,000 individuals associated with his Yeshiva who traveled with him.

Many many families traveled with Abraham. They represented a wide range of doctors, educators, merchants, servants, herders, etc. They were a massive band of traveling nomads. They were a city of nomads that Abraham left Haran with, as noted in (Genesis 12.6). That is why Ha Torah says Abraham was very wealthy.

The Lord Says in (Genesis 18.19) ‘I know him, that he will command his children and his household after him, and they shall keep the Way of the Lord, to do justice and judgment; that the Lord may bring upon Abraham that which he has spoken of him.’ (Isaiah 51.2) says, ‘Look to Abraham, your father, and to Sarah who gave birth to you; for he was only one when I called him, and Blessed him, and increased him.’

Avraham was very good at developing relationships and leading his followers. It is good when we follow our Father Abraham and his practices. May we stay within the Torah’s Guidelines of righteous living and repentance. May we help others and bring peace and healing to our world. May this coming Sabbath and every Sabbath be a blessed Day.