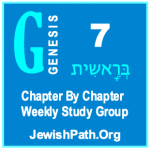 Study Partners Genesis chapter 7 discusses the impact of Observing The Lord’s Commands. Noah’s family survived the flood because they tried to follow God’s Ways. Noah’s family tried to remain pure even though a cesspool of sin surrounded them. Noah, his wife Na’ami, their three sons, and daughters-in-law were descendent’s of Mesushelach, Adam, and Chavah’s third son, Seth, who was the reincarnation of Abel.

On the other hand, the inhabitants of the world were incredibly corrupt. They disobeyed The Seven Laws. They stole, i.e., kidnapped, and brought about the destruction of the world then. They practiced homosexuality, bestiality, and human trafficking. People in Noah’s time were void of anything good. Rape, sodomy, and other sexual sins were common. The world was full of evil. (Genesis 6.5) says, ‘And God saw that the wickedness of man was great in the earth and that every imagination of the thoughts of his heart was only evil continually.’ Sefer Ha Yasher [Jasher] also depicts the evil in the world at that time.

Tolerance and forbearance are essential in our world. However, the inhabitants of the world were too willing to tolerate sinful behaviors. They drifted more and more away from The Seven Laws until the entire world became corrupt. Morality, ethics, and right living were not evident. The new social norm brought about a breakdown in society. The Lord God Intervened. ‘By the 480th year of Noah’s life, only Mesushelach remained of the old traditional generation.’ Sefer HaYashar (Hoboken, NJ: KTAV Publishing House, Inc., 1993) p16.

Thank God our world has not reached that point! Nevertheless, we are seeing the values of the previous generations diluted beyond recognition. Red flags are flying everywhere!

Ha Torah Records that Noach, his wife, his sons, his son’s wives, the clean and unclean animals, the birds, and creeping things all Obeyed the Command of The Lord God. (Genesis 7.5) says, ‘Noah did according to all that the Lord Commanded him.’ (Genesis 7.9) says, ‘They went in two by two to Noah into the ark, the male and the female, as God had Commanded Noah.’ (Genesis 7.16) says, ‘And those who went in, went in male and female of all flesh, as God had Commanded him; and the Lord closed [them in].’

Why does Ha Torah Inform us of the Word צִוָּה Tzee Vah – ‘Commanded’ / Command three times?

When we repeat an action or word three times, it becomes a vow. Ha Torah Notes that God Vowed that those who have the breath of life on the outside of the Tava were going to perish. ALL HOPE ended in verse 16 when HaShem God shut the door on the Tava. The survivors are sealed inside in the Ark. In another study I list some of the many warning to that wicked generation. They were warned but refused to heed the warnings.

Three individual usages of צִוָּה Tzee Vah ‘Command’ also note the commitment of Noach, his wife, his sons, his son’s wives, the clean, unclean animals, birds, and creeping things to obey what HaShem God Commanded. Their free choice to obey, to prepare to enter and to be separated – ‘Holy’ from those outside of the Holy Tava are noted by the Word צִוָּה ‘Command’ in Genesis.

Their obedience, of clinging to God’s Command, saved them.

Study Partners, our review of The Lord’s Command is a nudge to help us be mindful of our observances. May we each be careful to honor our Creator’s Commands written in Ha Torah. May we be careful to guard Torah Mitzvot. May we stand up for morality, ethics, lovingkindness, goodness, and righteous living in our world.