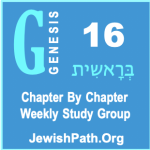 Why does (Genesis 16.1 – 3) repeat שָׂרַי אֵשֶׁת אַבְרָם – Sarai wife of Abram? Ha Torah is drawing a fine line between Sarai, a loving, caring wife, and Sarai, the wife of Abram. (Genesis 11.30 – 31) says, ‘Abram and Nahor took wives; the name of Abram’s wife was Sarai’ – ‘Sarai [was Terach’s] daughter-in-law, [she was] his son Abram’s wife. – Sarai was barren; she had no child.’ Holy Scripture is informing us Abram, and Sarai had consummated their marriage. They had sex, yet, Sarai was barren. (Genesis 17.17) informs us that Sarai was barren for ninety years. That was a trial of immense proportions. Sarai was prohibited from fulfilling the Mitzvot/Observance ‘Be fruitful and multiply in (Genesis 1.28; 9.7). Ha Torah informs us that a person without children is considered dead. In (Genesis 30.1) Rachel said to Jacob, ‘Give me children or else I am dead.’ We must NOT overlook how Sarai felt or push aside her trial as if she were the only wife experiencing barrenness. She felt so isolated and alone knowing God’s Promise was to Abram in (Genesis 12.2) saying, ‘I will make of you [Abram] a great nation, and I will bless you [Abram], and make your name great [Abram].’ As Sarai, the wife of Abram, she understood, but as Sarai the wife, she hurt deeply. She was sixty-five years of age. She longed for children over fifty years. Nature’s time clock was quickly winding down. Menopause was approaching. Was her husband concerned? It did not seem that way! Sarai was a wife who was hurt, lonely and frightened who struggled within herself with this back-and-forth between the physical Sarai and the Spiritual Sarai. It was indeed a difficult trial! Five years earlier, Abram said to the Lord in (Genesis 15.2) ‘Lord God, what will you give ME, seeing I go childless, You have not given ME seed.’ Abram appears pretty single-minded in (Genesis 15). Were any of Abram’s words in (Genesis15) comforting to Sarai? After all, she was the wife of Abram. She was a gifted prophetess with a more excellent prophetic perception than her husband. Yet, as the wife of Abram, she had to be careful not to overshadow her husband. Abram was a great leader and a highly respected prince. On occasion, The Lord God Spiritually visited Abram. The Angels Gabriel, Michael, and Rafael visited him. Kings, Generals, and other dignitaries visited. Sarai listened to their verbal communications from her tent, where she privately prayed and waited upon the Lord God. These were the prescribed customs for women of that age. Sarai was usually modest and discrete. However, there were times she collided with Abram’s impractical, less discerning side. Perhaps there were a few times where she, so to speak, EXPLODED! Still, the outspoken dominating spiritual Sarai was NOT a feminist! She was modest! Her dress did not emphasize her figure or attract sexual attention even though she was beautiful and shapely. Sarai’s behavior was appropriate, courteous, dignified, polite, non-assuming, and humble. She was not arrogant, flip, or haughty. Sarai was a polished example of what one would expect from the Matriarch of women. If this seems out of place it is because society has taken women down another path even though Ha Torah remains the same.

Do not think for a moment that the lifestyle required for being Abram’s wife was easy for Sarai. Sarai is the Matriarch of women. She did not eat the forbidden fruit or deceive her husband. Her faith and obedience to the Lord God protected her. Her struggles were plenty large enough, and her trials were very daunting.

Study Partners (Genesis 16.3) says, ‘And Sarai Abram’s wife took Hagar her maid the Egyptian after Abram had lived ten years in the land of Canaan, and gave her to her husband Abram to be his wife.’ How easy was that? How greatly did that hurt? As a spiritual woman, Sarai could see prophetically into the future that she would eventually have a son, but in the here and now, the physical Sarai hurt. Abram could have refused her gesture. He could have empathized and shown tenderness, compassion, lovingkindness and prayed for Sarai. Ha Torah does not mention any prayers Abram prayed for his barren wife. It seems like Sarai’s barrenness was on her.

Abram had fifty-plus years to plead to the Lord on Sarai’s behalf. We see a series of incidences where Abram did not take Sarai’s part (Genesis 16). His attitude was, do not involve me. A great deal of sensitivity is necessary. Stop what you are doing and LISTEN to your wife. Try to understand her point of view. Husbands, it is one thing to be mindful of your wife’s trials and another to empathize with her and faithfully support her with prayerfulness and encouragement. Each of us has challenging days. Yet, if we read The Torah and The Psalms, they will help deliver us out of anguish and encourage us.

May we stay within the Torah’s Guidelines Of righteous living and repentance. May we help others and bring peace and healing to our world. May this coming Sabbath and every Sabbath be a blessed Day.