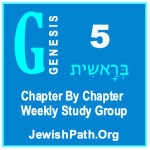 Study Partners Genesis Chapter 5 begins with the discussion of God’s Creation of ‘Adam.’ Why does Ha Torah return to the creation of humankind?  First, Ha Torah informs us that God Made man in one day. (Genesis 5.1) says, ‘In the day when God created man.’ Then our discussion quickly leads us into unfamiliar territory. Second, The Man/Woman was created with both male and female sexual organs.

(Genesis 5.2) says, ‘זָכָר Zaw Chawr Male וּנְקֵבָה Voo Nih Qay Vawh and Female בְּרָאָם Bih Raw Awm created He them, and blessed them, and called their name Man, in the day when they were created.’ Holy Scripture says He Created them as Male and Female. Third, וַיִּקְרָא אֶת־שְׁמָם אָדָם He called their name Adam. There was a male Adam / female Adam in the same body.

One side was the male Adam, and One side was the female Adam. Let’s say that the male Adam faced east; then the female Adam faced west. They were created OPPOSITE of each other. (Genesis 2.18) says, ‘And the Lord God said, ”It is not good that the man/woman should be alone; I will make him/her an עֵזֶר (Ay Zehr) a helpmate to match him/her.”’ עֵזֶר (Ay Zehr) also means, ‘One Opposite of him/her.’

What is it like to be like God? Fourth, We are informed that we are made in the [Spiritual] likeness of God. What does that mean? We know that God is Spirit. (Genesis 2.7) says, ‘And The Lord God Formed The Adam [refering to both the male Adam and the female Adam] from the dust of the ground, and breathed into their nostrils the breath of life; and the man/Adam became a living soul.

So we see the physical part of humankind in (Genesis 2.25) as being naked like the beast of the field.

Adam and Chavah’s Aw Room, subtle nakedness, guile, and craftiness surfaced after their disobedience. It was always present with them, but the Shekinah separated the evil from the good. Remember! Everything created in us, including the potential for corruption, was made before any of us became downtrodden and disobedient to The Lord. We can allow disobedience to grow in our lives, or we can put an end to disobedience in our lives.

Disobedience causes us to hide from The Lord like Adam and Chavah did (Genesis 3.7 – 3.13).

When we think of God’s Likeness, perhaps some of us may think of God as Spirit, Wind, or Breath. We can feel God but not see God. We see manifestations of God like a mighty wind bending tree branches, a cloud, or a pillar of fire.

Study Partners, we are Spirit because The Lord God breathed Spirit into us. Our Spirit resembles God. Those who believe in the trinity teach that God is a Father, a son, and a Spirit. Nowhere in The Holy Scriptures do we read Adam was a son. Neither Adam nor Chavah had a father or a mother. Women cannot be fathers or sons. That in and of itself should make it clear that God is not a trinity.

God Willing, we will continue to stay within Ha Torah’s Guidelines of righteous living and repentance. May we help others, May we bring peace and healing to our world. May this coming Sabbath and every Sabbath be a blessed Day.