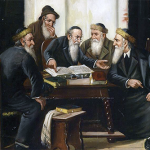 Study Partners, Genesis Four, says Abel kept sheep, and Cain tilled the ground. Both are honest, respectable occupations. Cain produced barley, oats, rye, spelt, wheat, flax, nuts, berries, fruits, and vegetables. Abel made cream, cheese, butter, milk, and wool. Cain and Abel contributed to the betterment of life. Abel did not provide meat, poultry, or fish because all life on earth was vegetarian. All earthly beings practiced harmony. The Lord God Forbid taking the life of living beings. We were required to live harmoniously in friendly, amicable, congenial, peaceful compatible relationships with all living beings. Pain and disease did not exist.

(Genesis 1.29 – 30) And God Said, ‘Behold, I have given you every herb bearing seed, which is upon the face of all the earth, and every tree, on which is the fruit of a tree yielding seed; to you, it shall be for food. Every beast of the earth, and every bird of the air, and to everything that creeps upon the earth, where there is life, I have given every green herb for food; and it was so. God Did Not Allow Adam to kill beasts or to consume their flesh. The Lord God Permitted the consumption of meat, poultry, fish, et cetera beginning in Noah’s time. Rabbi Zalman Sorotzkin, Insights In The Torah – Bereishis (Brooklyn, NY: Mesorah Publications, Ltd. First Edition, 1991), p33

(Genesis 9) says, And God Blessed Noah and his sons and said to them, Be fruitful, multiply, and replenish the earth. Fear and dread shall be upon every beast of the earth, bird of the air, and upon all that moves upon the earth, and upon all fishes of the sea; They are delivered into your hand. Every living moving thing shall be food for you, even as the green herb. I have given you all things.’

The first six days of creating were lengthy periods. Science testifies to that fact. A day was not 24 hours.

Cain and his twin sister were born on the sixth day of creation before their parents, Adam and Chavah were expelled from The Garden of Eden for their sins of disobedience. We know this because (Genesis 3.16) says, ‘[The Lord God] said to the woman, I will greatly multiply the pain of your childbearing; in sorrow, you shall bring forth children.’ Before Chavah’s sin, while she lived in The Garden of Eden, there was no pain or depression in childbirth. Cain was born in The Garden of Eden without pain or suffering. Abel was born outside of the Garden of Eden after humankind sinned. There was a great deal of pain and suffering. The point is Chavah had to experience childbirth before her sin otherwise how would she realize the pain of childbearing?

There was a dispute between the brothers over which one should be permitted to marry the third sister. Cain felt like the honor of having two wives should be his because he was the older brother, and because he was born in The Garden of Eden before sin. On the other hand, Abel felt like it was evident that he should be the brother who was permitted to marry the third sister. Abel and his two sisters were born in purity outside The Garden of Eden and shared the same experiences.

It appears that the decision was made in favor of Abel. Our Sages teach that Cain’s anger and jealousy led to him murdering his brother. It is at this point in human history that humankind faces a hideous sin. We will now examine the issues leading up to Abels’ death and how Our Creator taught us to face and correct our sins.

Up until now, Cain controlled his anger, jealousy, and frustrations.

In Genesis Four, we come face-to-face with how a sinner repents from sin. The Holy Scriptures spell it out. ‘IMPROVE’ We understand what improves means.

Our sages teach that Adam, after some time, passed spoke to his sons about tributes. Genesis 4.3 Adam indicated that this season would be The Jewish Passover at a time in the future. He explained to his sons that The People of Israel would bring Paschal sacrifices that The Lord would favorably receive. Our sages taught that it is an auspicious time for each son to bring a Tribute to The Lord for His pleasure. Rabbi Meir Zlotowitz and Rabbi Nosson Scherman, The Artscroll Tanach Series – Bereishis Vol. I(b) (Brooklyn, New York: Mesorah Publications, Ltd. 3rd Impression, 1989), p 144

What type of Tribute did they bring? The words used in regards to Cain and Abel bringing a Tribute is מִנְחָה Minchah [Tribute] and מִנְחָתוֹ Minchato in (Genesis 4). These words mean they offered something other than a meat offering. The first time a meat/animal Offering was given, the word Oh Lot is used. That was in Genesis 8.20 when Noach offered animal sacrifices for the first time.

Burnt Offerings were permitted by The Lord God in 1657 From Creation when Noah builds an altar and offers the first burnt sacrifice.

(Genesis 8.20) says, And Noah built an altar to The Lord, and took of every clean beast, and every clean bird, and offered עֹלֹת Oh Lot – burnt offerings on The Altar.’

Abel’s Tribute was noticed/accepted. Cain’s Tribute was NOT noticed/accepted. The Lord Gazes at Abel. The Lord does not Gaze towards Cain. How should we define this? Was that merely good fortune for Abel, or was that something more? NO! Abel placed himself in a position that opened the doors of blessing. Cain did not. It was not that good fortune shined on Abel. Abel did specific things that Cain did not do. There were reasons The Lord turned towards Abel. There were reasons why The Lord did not turn toward Cain. There was a reason why The Lord Accepted Abel’s Tribute and not Cain’s Tribute. Cain did specific things to cause The Lord to Turn away from him and his Tribute. Cain was a sinner.

(Genesis 3.24) says, So [The Lord God] וַיְגָרֶשׁ אֶת־הָאָדָם drove out Everything from Aleph to Tav of the man, and He placed Kerubim at the east of the garden of Eden, and a flaming sword which turned every way, to guard the way to of the Tree of Life.’

Chavah was taken from the man. Cain and his twin sister were born from Chavah. Therefore each was a part of Adam, and as a result, they were driven out from The Garden of Eden. Cain was angry!! He and his sister are stained with their father’s sin. In a similar instance, my sons were tainted by my poor business decisions. And as a result, we ended up losing our businesses. They felt the pain as we went through the holidays with nothing. They felt the problem of their parents separating and divorcing. That pain still affects them decades later.

As mentioned before, Cain was also angry because his younger brother, Abel, was born with two twin sisters. Now Cain’s displeasure/anger grew. He expressed his anger with The Lord by giving spoiled flaxseed as his Tribute. Cain came with fruit from the ground as a Tribute to The Lord. The ground was cursed because of Adam’s sin (Genesis 3.17). Cain brought fruit from the cursed ground (Genesis 4.3). Midrash Tanchumah states Cain’s Tribute consisted of poor-quality flaxseed. [Cain gave] inferior produce as a Tribute, taking the best for himself. (Eitz Yosef} Avrohom Davis, Metsudah Midrash Tanchuma Bereishis 1 (Monsey, NY Eastern Book Press Inc. 2005) p50

The Torah Distinguishes between Cain and Abel’s Tributes. Cain’s Tribute was rejected because it was not of his first fruits. It was not the best of his First Fruits! The flaxseed that he brought was spoiled.

Abel’s brought from his flocks.

Abel brought from the firstborn of his flocks.

Abel brought the best from the firstborn of his flocks.

Abel’s Tribute was NOT A BLOOD SACRIFICE! The first sacrifice of animals and birds did not occur until 1657 FC in (Genesis 8.20). It was at this time that our Creator began Allowing humankind to eat meat. Before 1657 FC, every being was vegetarian. How do we know Abel did not offer a blood sacrifice? They did not build an altar because they were prohibited from slaughtering animals (R’ Yosief Kimchi; Tur). Rabbi Meir Zlotowitz and Rabbi Nosson Scherman, The Artscroll Tanach Series – Bereishis Vol. I(a) (Brooklyn, New York: Mesorah Publications, Ltd. 3rd Impression, 1989), p145.

The Creator’s Remedy for Cain’s sin was to improve yourself. If you conquer your temptation and do what’s right, you will be forgiven. (Genesis 4.7) In other words, acknowledge that you made a mistake, make a plan not to repeat the same error, offer restitution. That is what improvement is.

But if [an individual’s financial ] means are insufficient for two turtledoves or two young doves, then he shall bring, as his guilt-Tribute for that which he sinned, He shall bring it to the Kohen, and the Kohen shall scoop his three fingers full as its memorial portion and shall cause it to go up in smoke on the Altar, on the fires of The Lord; it is a sin Tribute. The Kohen shall provide him atonement for the sin he committed regarding any of these, and it will be forgiven him; and it shall belong to the Kohen, like the meal-Tribute. (Leviticus 5.11-13)

When a man follows The Torah, The Torah atones for man. How do we know this? The Gematrias are the same. The Torah is Perfect. The Torah can and does atone for man. So in the Observance of the Torah, we see the portrayal of atonement for man.

The portrayal is that each man above the age of twenty brought a half-shekel as an atonement. Notice the specific Words איש כפר Eesh- Chih Pehr, meaning atonement for man. The Gematria for The Word תורה Torah / Law is 611. The Torah represents The 613 Commands and The Covenant.

Each of us is Blessed with the atonement from The Torah.

(Psalms 19) says, ‘The Torah of The Lord is perfect, reviving / restoring / returning the soul.’

שב Shuv / One who Returns

Improvement is acknowledging one has left the path. Changing course, i.e., Doing a 180° turn, going in the opposite direction, making a plan not to repeat the same mistakes, and paying restitution. Even when we fail, God is Loving, Compassionate, and Forgiving.

(Ecclesiastes 12.1 – 7) says, ‘Remember now your Creator in the days of your youth, before the evil days come, and the years draw near, when you shall say, I have no pleasure in them; Before the sun, and the light, and the moon, and the stars are darkened, and the clouds return after the rain; In the day when the keepers of the house tremble, and the strong men bow themselves, and the grinders cease because they are few, and those who look out of the windows are dimmed… And the dust וְיָשְב Vih Yaw SHOOV / RETURNS to the earth as it was; and The Spirit תָשוּב Taw Shoov / RETURNS to God who Gave It.’

Even after we leave this world and our body returns to dust, our spirit returns to God; these are the steps of repentance. Also, Leaving money for charity after we are gone is a form of atonement.

Our Scripture beckons us to be responsible by seeking forgiveness of our sins and returning to The Path of Observance. We can save our country and our world!

May each of us have a beautiful pleasant happy sabbath observance.