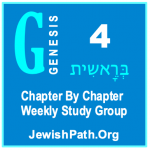 And the man new אֵת Eht everything from Aleph to Tav of his wife, Chavah / Eve and she conceived and she gave birth אֵת Eht of everything between Aleph to Tav of Cain. As noted in other studies אֵת Eht may be defined as entirely or completely.

Cain and his twin sister were born on the sixth day of creation before their parents, Adam and Eve were expelled from The Garden of Eden for their sins of disobedience. We know this because (Genesis 3.16) says, [The Lord God] said to the woman, ‘I will greatly multiply the pain of your childbearing; in sorrow, you shall bring forth children.’ Prior to Eve’s sin, while she lived in The Garden of Eden, there was no pain or depression in childbirth. Cain was born in The Garden of Eden without pain or suffering. Abel was born outside of the Garden of Eden after humankind sinned. There was a great deal of pain and suffering.

There was a dispute between the brothers over which one should be permitted to marry the third sister. Cain felt like the honor of having two wives should be his because he was the older brother and because he was born in The Garden of Eden before sin. On the other hand, Abel felt like it was obvious that he should be the brother who was permitted to marry the third sister. After all, Abel and his two sisters were born in purity outside The Garden of Eden and shared the same experiences.

It appears that the decision was made in favor of Abel. Our Sages teach that Cain’s anger and jealousy led to him murdering his brother. It is at this point In the human history that humankind faces a hideous sin. We will now examine the issues leading up to Abels’ death and how Our Creator taught us to face to correct our sins.

Originally all humankind and animals were vegetarians. We remained vegetarians until after Noah’s flood in 1657 F.C. In chapter 15 of God’s Plan From The Beginning I explain how and why there were no blood sacrifices on earth until after Noah’s flood. Understanding this is important. Cain and Abel brought tribute offerings. Cain’s offering was rejected because he brought spoiled flaxseed. Cain’s Tribute that was not from the first fruits of his vegetarian produce. Cain’s Tribute was NOT rejected because it was vegetarian. It was rejected because of Cain’s stubbornness, stinginess and a very poor choice for a Tribute to the Creator. Abel’s Tribute was from the firstborn milk, cheese, and fat of his flock.

And The Lord Said to Cain, Why are you angry? and why is your countenance fallen? If you improve yourself, you shall be accepted and if you do not well, sin lies at the door. And to you shall be his desire, and yet you may rule over him.

The Lord God Said to Cain, ‘If you improve yourself, you shall be accepted.’ The key to redemption is to improve one’s self. Part of improving is acknowledging one’s mistake, taking ownership for doing wrong. Cain would not take ownership for his sin. Therefore sin lay at his door and it consumed him. He died in his sins. ALL that was required was for Cain to improve himself. Nothing more! When we fail we follow the same path as discussed in Genesis three., our final repentance is automatic when our body decays in the grave.

Study Partners, it is especially wonderful to know that The Lord God Offers us easy ways to repent. May we stay within Torah’s Guidelines Of righteous living and repentance. May we help others, May we bring peace and healing to our world. May this coming Sabbath and every Sabbath be a blessed Day.