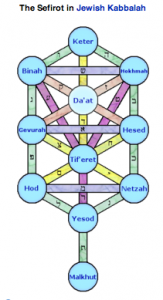 Against your will, you are formed,

Against your will, you are born,

Against your will, you live,

Against your will you die, and

before the King, king of all kings, The Holy One, Blessed Be He. Avot 4.22

Look at G-d’s work – for who can straighten what He has Twisted?. When the Blessed Holy One Created the first human, He took him and Led him round all the trees of the Garden of Eden and said to him: Look at My works, how beautiful and praiseworthy they are! And all that I have Created, it was for you that I Created it. Pay attention that you do not corrupt and destroy My world: if you corrupt it, there is no one to repair it after you. Koheles Rabbah 7.13

Devarim (Deuteronomy) 7.1-2 You shall not make a treaty with them

We are not allowed to make a treaty with the Seven Nations of Canaan, the nations that inhabited Eretz Yisrael before its conquest by the Jews.

The land of the seven nations

– the seven emotions that need to be refined

– these are the garments of the soul.

And Jericho had shut its gates and was barred because of the children of Israel; none went out and none came in.  And the L-rd said to Joshua, See, I have given into your hand Jericho and its king, the mighty warriors.  Yehoshua (Joshua) 6.1-2

Jericho represents the soul’s three garments, thought, speech and deed.  These are from the animal soul.  The Divine soul is found in the love and awe (fear) of G-d when we think and understand Words of Torah, speak Words of Torah, and when we do Mitzvot.  These Mitzvot become the garments of our soul in the afterlife.

And it shall be when the L-rd shall Bring you into the land of the Canaanites, as He swore to you and to your fathers, and shall give it to you:  Shemot (Exodus) 13.11

The word Canaan in this verse is surrounded by a Hei and a Yud; they are letters of G‑d’s Name, hence

by surrounding Canaan they transform it.

The Rambam, in dealing with the rectification of one’s character traits in the service of G-d, speaks of the middle path, which seeks to void the extreme manifestation of any particular emotive attribute, and leads to a life of moderation and constant consideration of one’s fellow man.  The Hebrew Letters Rabbi Yitzchak Ginsburgh Gal Einai Publications, Jerusalem page 98